“China is exploring whether it can hurt U.S. defence contractors by limiting supplies of rare earth minerals, that are critical to the industry, the Financial Times reported.

How important are Rare Earth Minerals to the EU electronics industry.This from a Bloomberg Market Drivers update

“China is exploring whether it can hurt U.S. defence contractors by limiting supplies of rare earth minerals, that are critical to the industry, the Financial Times reported. Industry executives said government officials had asked them how badly firms in the U.S. and Europe would be affected if China restricted rare earth exports during a bilateral dispute, the FT reported, citing people it didn’t identify involved in the consultation. Rare earths are used in everything from smartphones to fighter jets. China controls most of the world’s mining and has an even tighter hold of processing.”

There is approximately 10 million tonnes of WEEE Generated in The EU every year of which about 3.5 million tonnes are recovered for processing and recovery. The rest disappears into the Global “grey market” or “sent for repair and reuse” or just shipped to the lowest cost of disposal location, without any consideration of the environmental consequences and bypassing the EU WEEE Directive.

It is possible to recover rare earth minerals from WEEE but it costs money and as usual, as we know from our twenty five years of experience in recycling WEEE, environmental considerations or, in the case of rare earth metals, considering the long term financial consequences to the wider community, go out the window when organisations are confronted with “Having to Pay” for proper disposal.

If China chokes off  rare earth minerals, the life blood of the electronics industry, we have no one to blame but ourselves.

The same thing applies to all the Copper lost in the 6.5 million tonnes of WEEE that disappears from the EU every year. 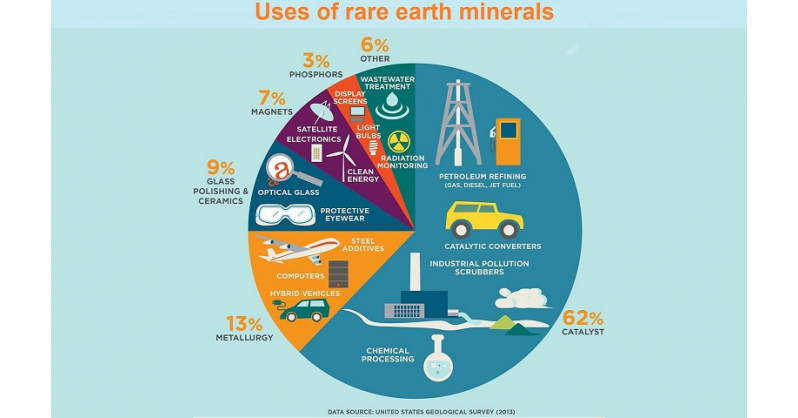